I am a big fan of the brand Revolution and there brands Revolution Pro and I heart Revolution, I haven’t tried any of there skincare range yet but I really want to. When I am buying new make up I tend to go to ELF  who I also love and Revolution. I do find that Revolution do the best colour ranges though, you can get any colour palette and I do like the collabs they do. The only problem is I cant stop at one. So this time I ended up with (say it quietly) four new revolution palettes (in my defense they were very reasonably priced) so if you are looking for some new palettes then please read on.

Now I do not believe these are the most current, I think the most current Revolution palettes and make up are the Revolution and Friends range. I have added a link to here to a couple of products I am looking at. The colours are amazing and I love that they each have there own lip gloss, I quite like the Chandler gloss as well.

I have never been too concerned with having the latest products just more the ones I like and I think will suit me. I tend to go for nudes and neutrals mostly with eye shadow so you will a couple of them in this haul. However I was starting to feel like my make up was a little frumpy (is that a thing?!), like most people in lock down I just haven’t been dressing up or using much make up which is really nice but I thought it would be good to jazz it up a bit with some new colour ranges for when I do next get the chance to go ‘out out’.

. This palette has 18 shades and I think they are so pretty, I particularly love the shades Artistic license, Trash and Intricate. 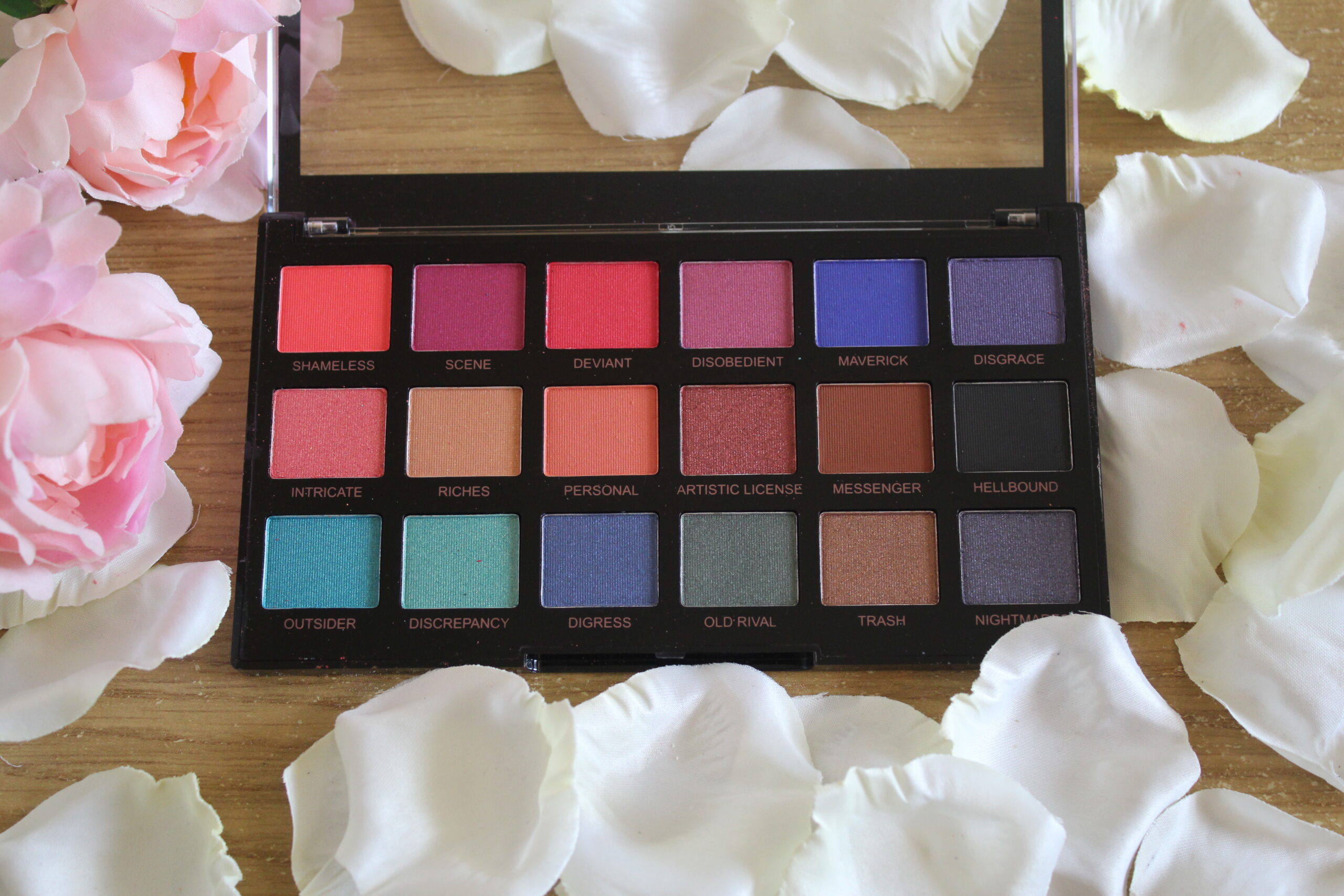 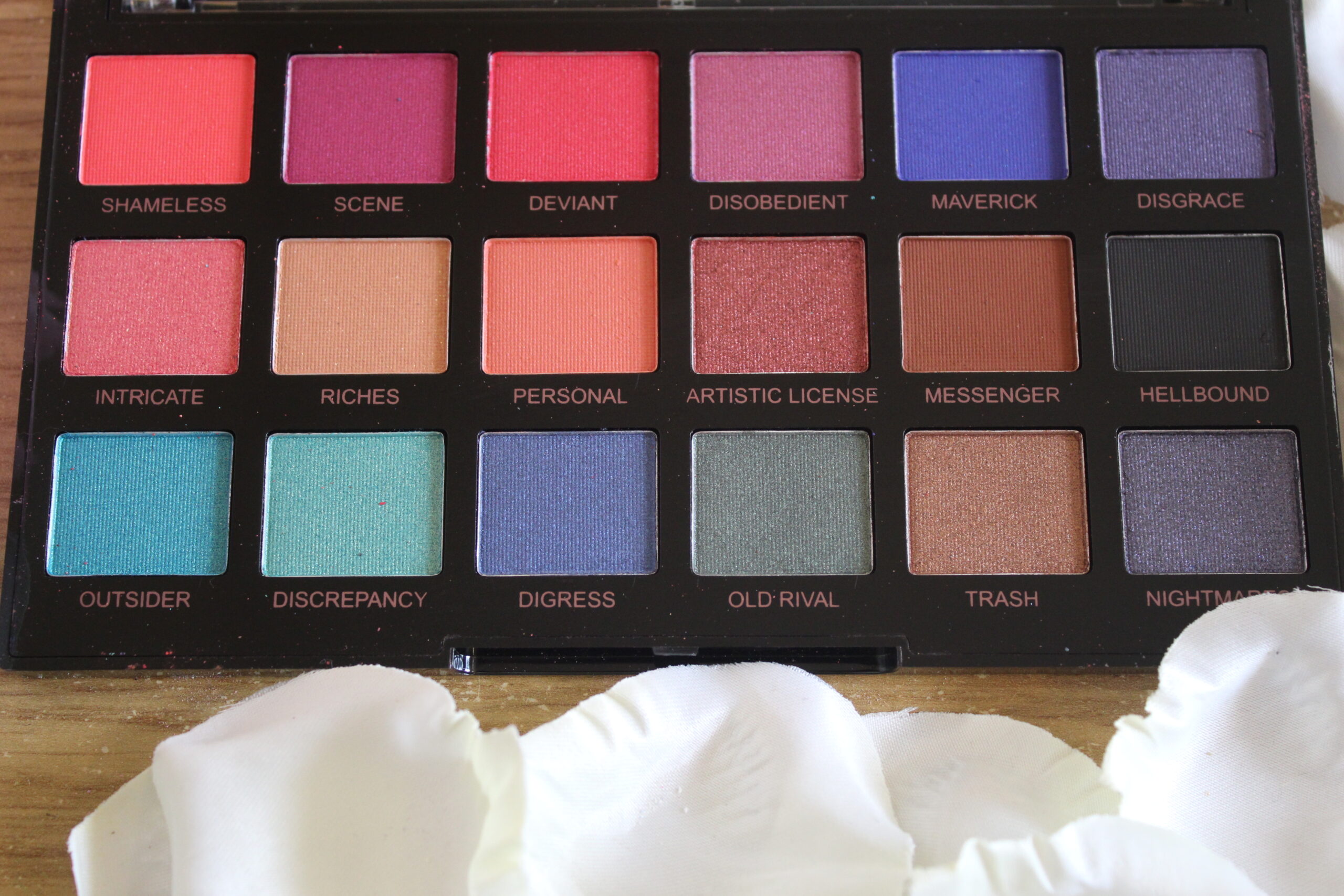 I like the fact that you could use this palette both in summer and winter. I feel like the top four and middle four from the left are really bright and summery and would look amazing with a tan on holiday. I have blue eyes so orange, corals and pinks are good for making my eye brighter. Then the rest of the palette has a lovely autumn and wintry feel.

This palette swatches really well, I am not sure if this is the most flattering picture of my arm but hopefully it gives you a good idea of the colours. The only two that didn’t show up as well is Intricate and Riches and these are actually two of my favourites. I think they would look amazing still but they are basically just a shimmer rather than a colour and shimmer. For me I would use them in the day or on holiday with a tan when I don’t want to wear much make up. The colours generally are really pigmented and creamy on the skin. The glitter colours were almost like a cream eye shadow in texture.

Overall a really good choice of shades and I do like the fact it has a mixture of mattes and shimmers to choose from. 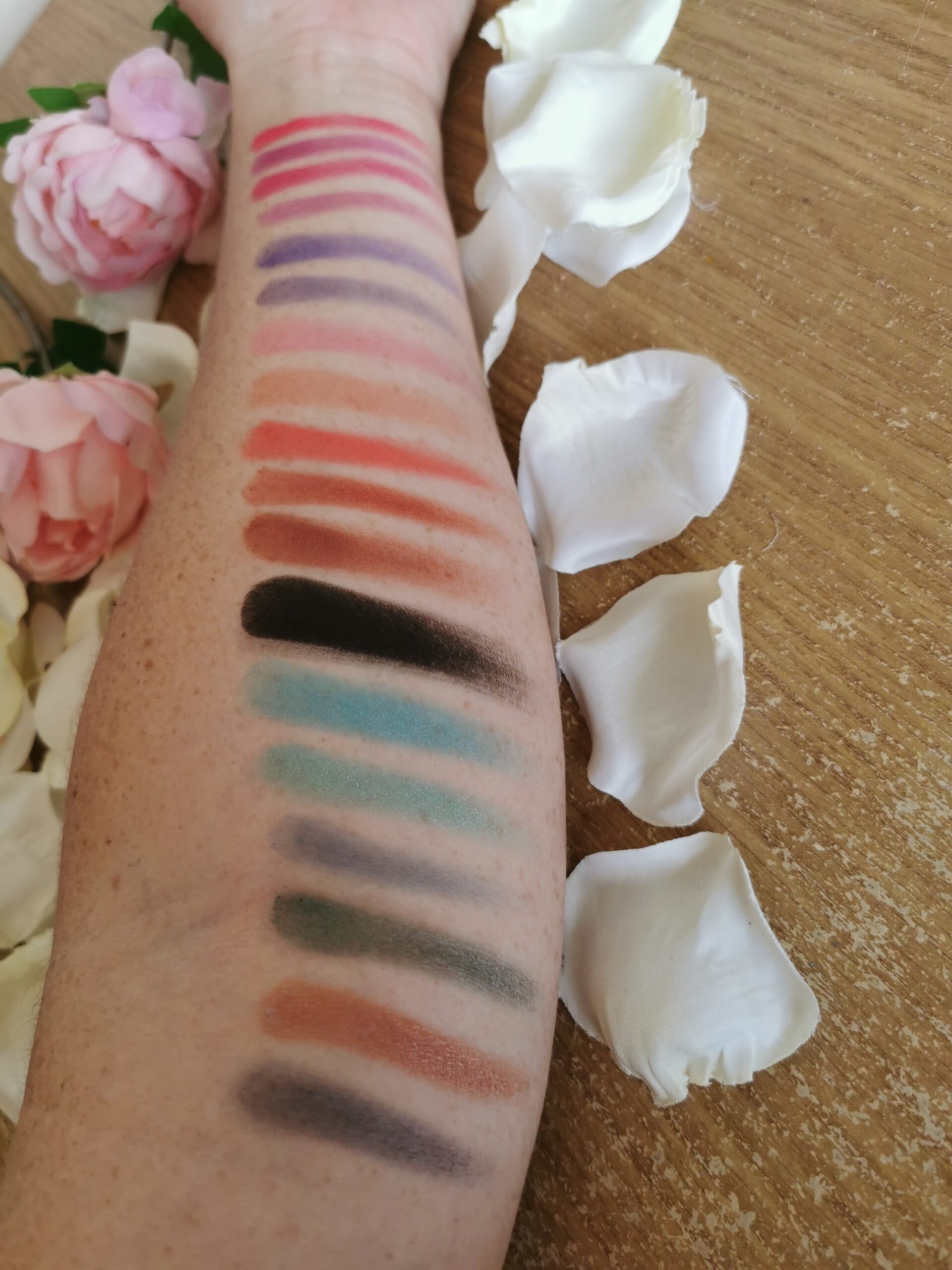 . This also has 18 shades and is more my usual choice for eye shadow shades. These are so pretty and again I thought they were perfect for autumn although they are quite cool tones. My favorite colours are the glittery ones again so Let go, Cut loose, Release, Rescue, Independent and Unrestricted. 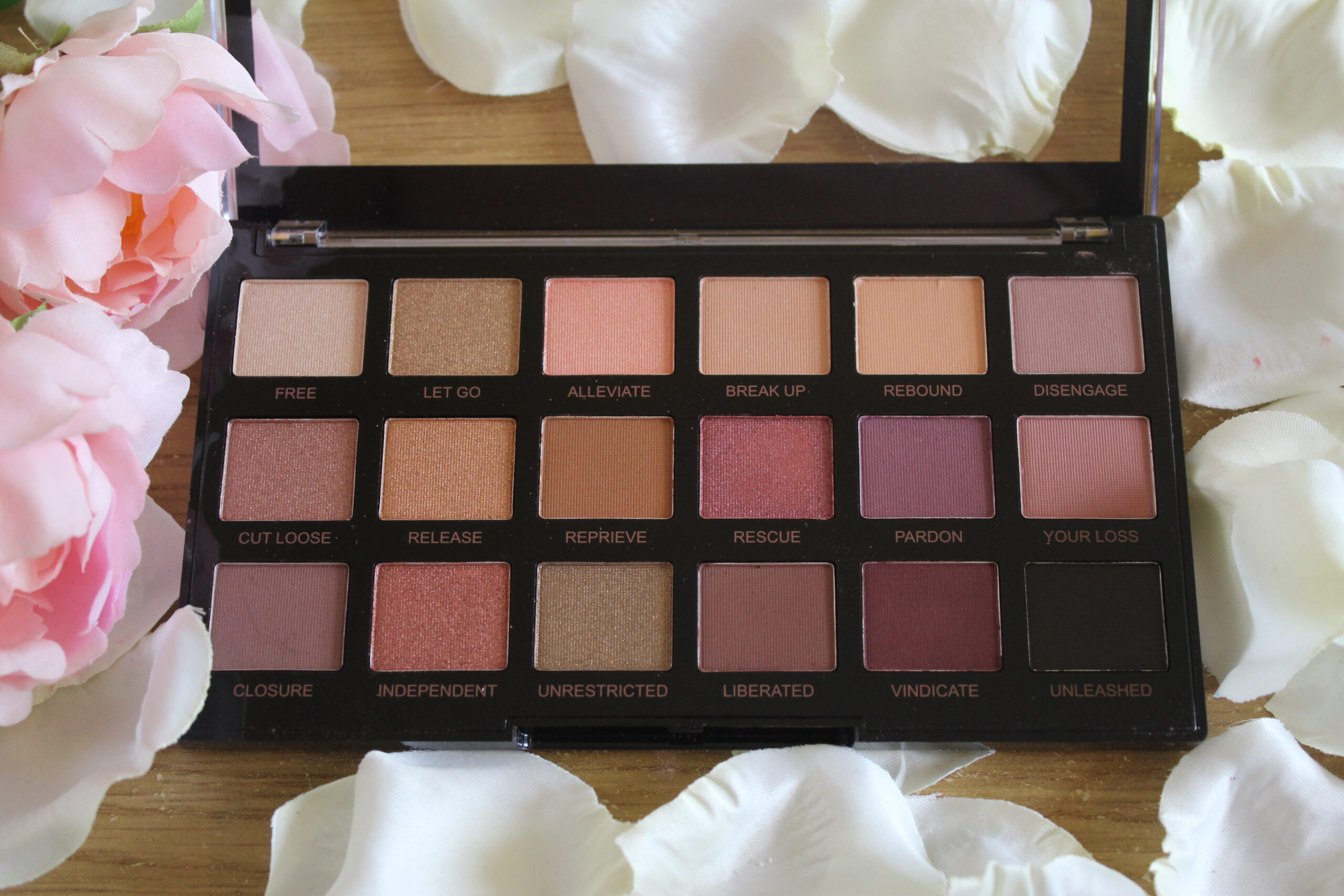 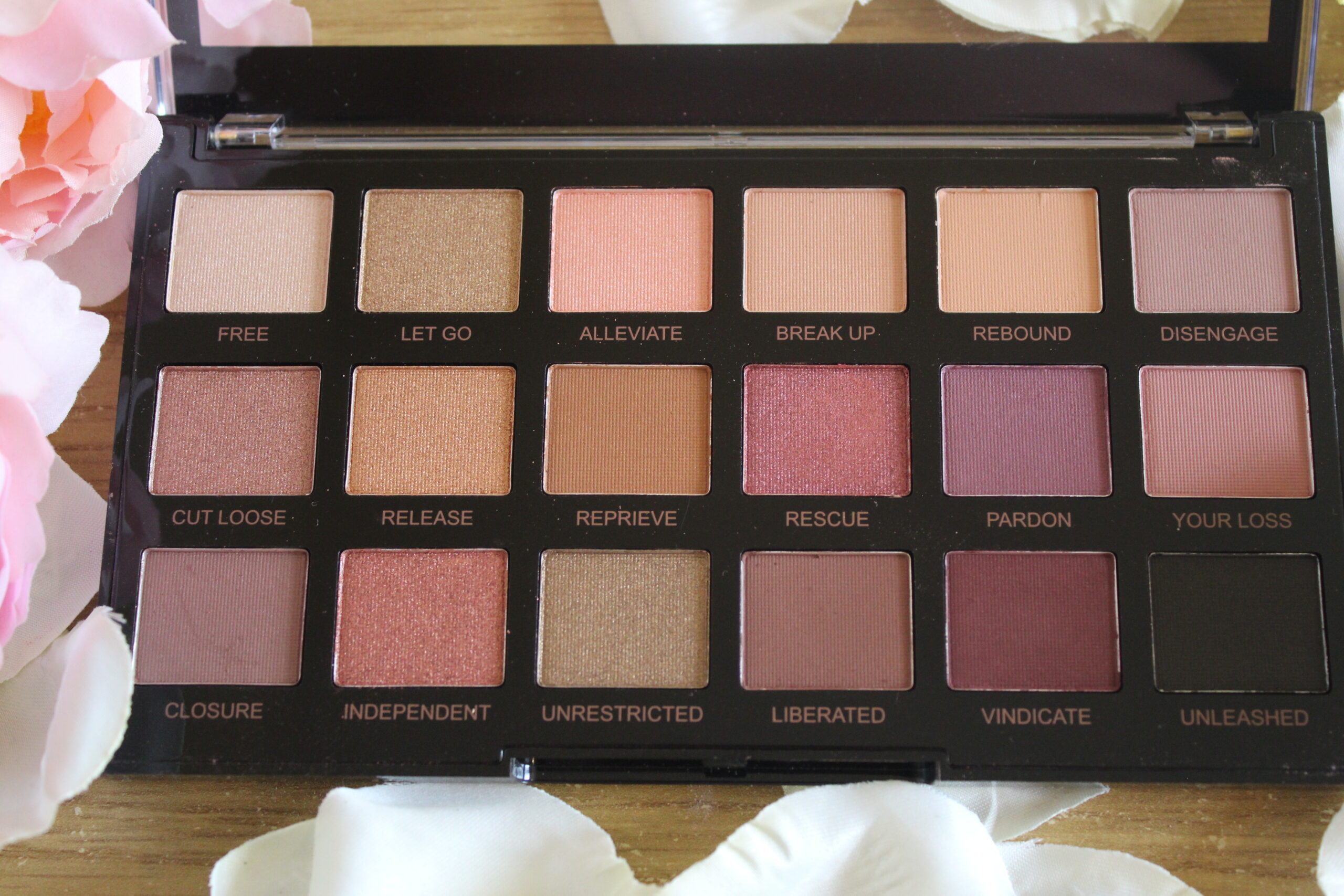 This palette swatches well again, some of the colours were not quite as good as the Mischief make palette for example in the picture below you cant really see Free which is the top right colour and Break up doesn’t show up amazing well but actually I would see these to set my eyes from primer / foundation and as a base coat anyway so I don’t necessarily need them to show up as a colour in there own right. This palette was a little more bitty than the mischief maker also and when I was doing the swatches there was a little fall out so that something I think I would need to be careful of with some of the darker colours on my face. 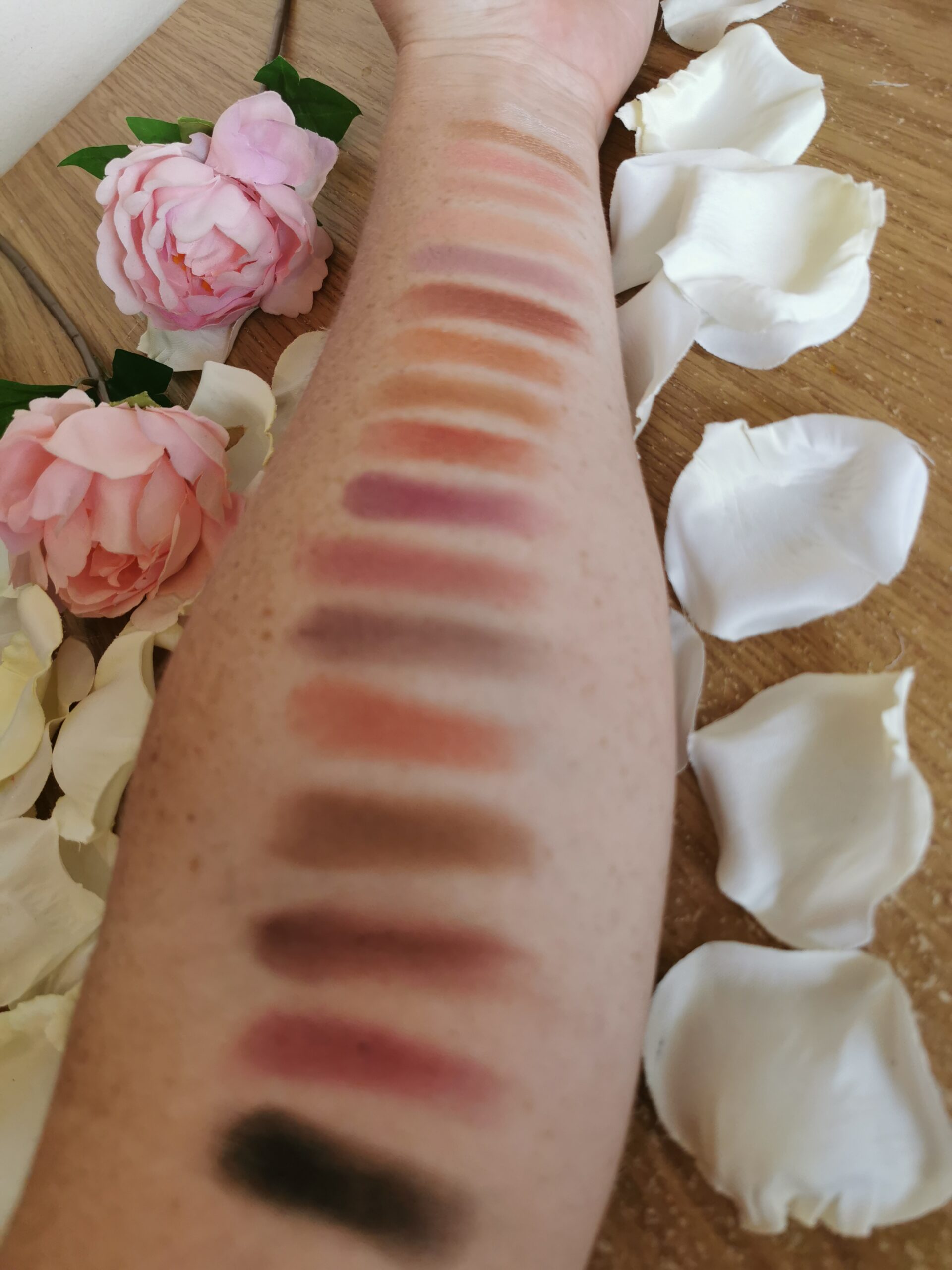 Next is my favourite for packaging and it is the Revolution Courage wild animal palette, the link is here Revolution Wild Animal Courage Palette

. I love the little detail of the tiger print on the actual shadows as well as the overall packaging. Again this is so pretty, I think I would actually go and buy each of these individual colours there is none that I wouldn’t wear. Its one of those that I almost don’t want to use as as soon as I do the pretty detail will go. 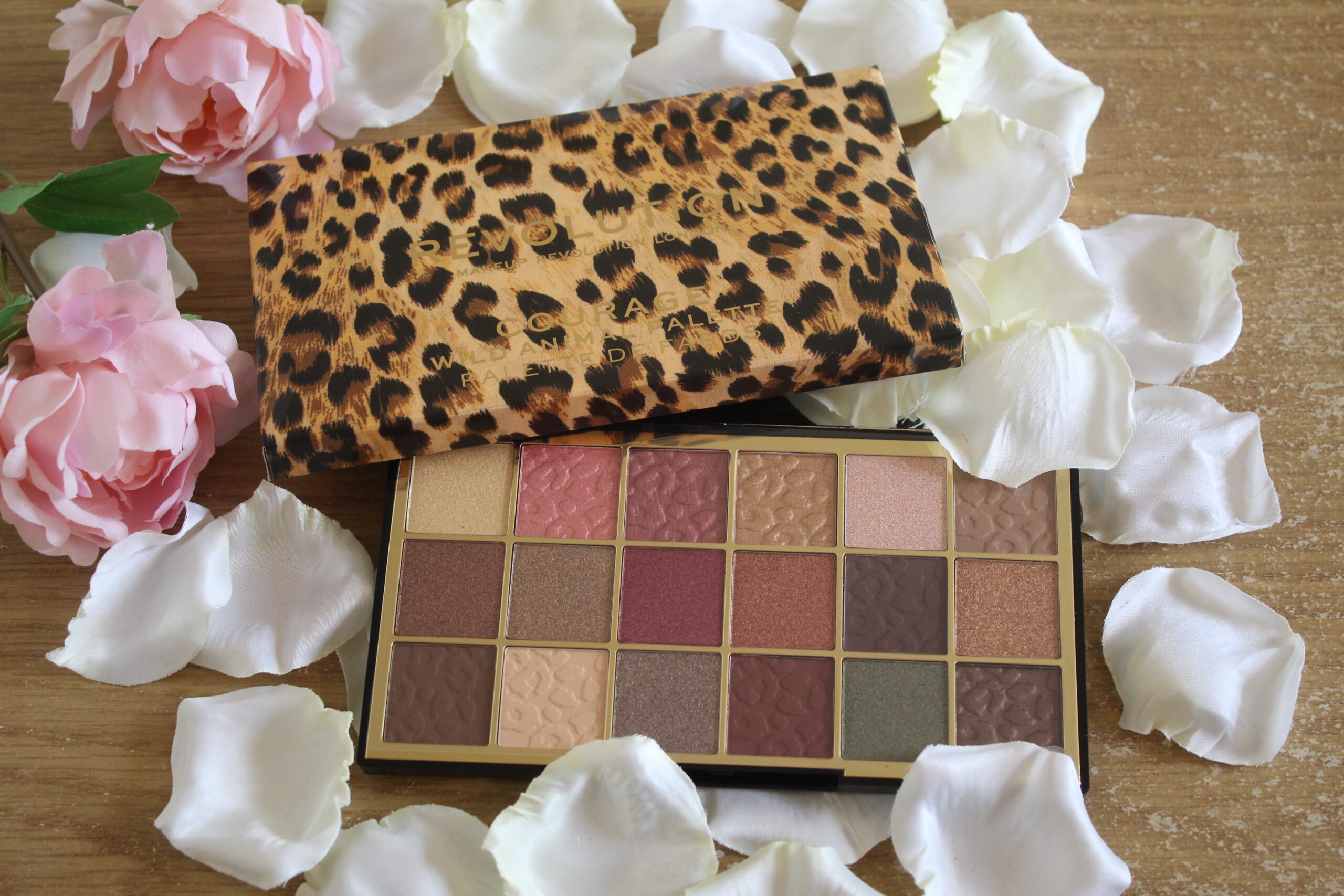 When I looked at the palette I thought it was really natural colours but actually there is some surprises in there. The shade on the bottom second from the left, its like a glittery teal / navy blue colour which is so pretty. I actually think it doesn’t show up on the swatch as well as it should due to it being in the bad position on my arm crease (nothing I can do about that) but it is actually amazing.

There are a couple of colours again that didn’t show up as well for example the bottom row second from the right but they would be good again to use to set my primer. The fact that these do not have names is a little frustrating but then not everyone buying this palette writes a blog about them so maybe that just me.

The only thing I would say is that the glitter ones are again like cream eye shadows but come off a little clumpy and they take a little blending to spread across my eye lid as they initially stuck to the place that I out then on the lid (if that make sense). Once I have blended them though they are literally amazing and really durable. I used this palette and then sat in the sun so it had to contend with my eye watering and the heat and it didn’t budge or smudge. For someone with sensitive eyes I was very impressed. 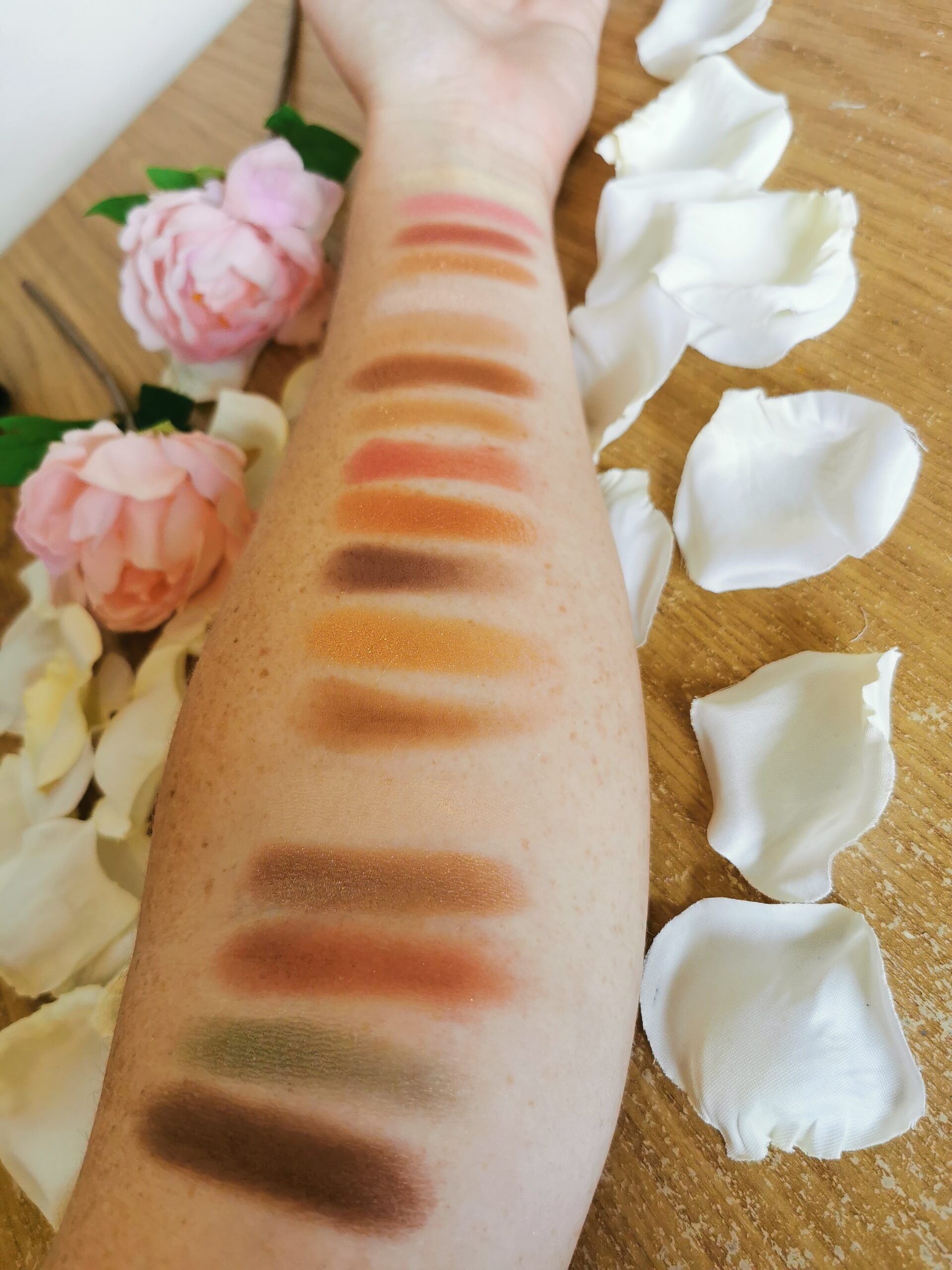 . This is such a different palette to the others as they are all pure pressed glitter rather than eye shadow. This was most certainly an impulse buy as I am not 100% sure where I will wear these colours as they are so glittery. I am thinking maybe Christmas parties (if we can have them in 2020) and holidays.

These are a bit messy and I had glitter everywhere with the swatches for this one but they are really true to colour, what you see on the palette are exactly what you get when you out it on the lid. I couldn’t really blend them they go where you placed them and it was messy to move and also the glitter started to separate if I tried to move them. 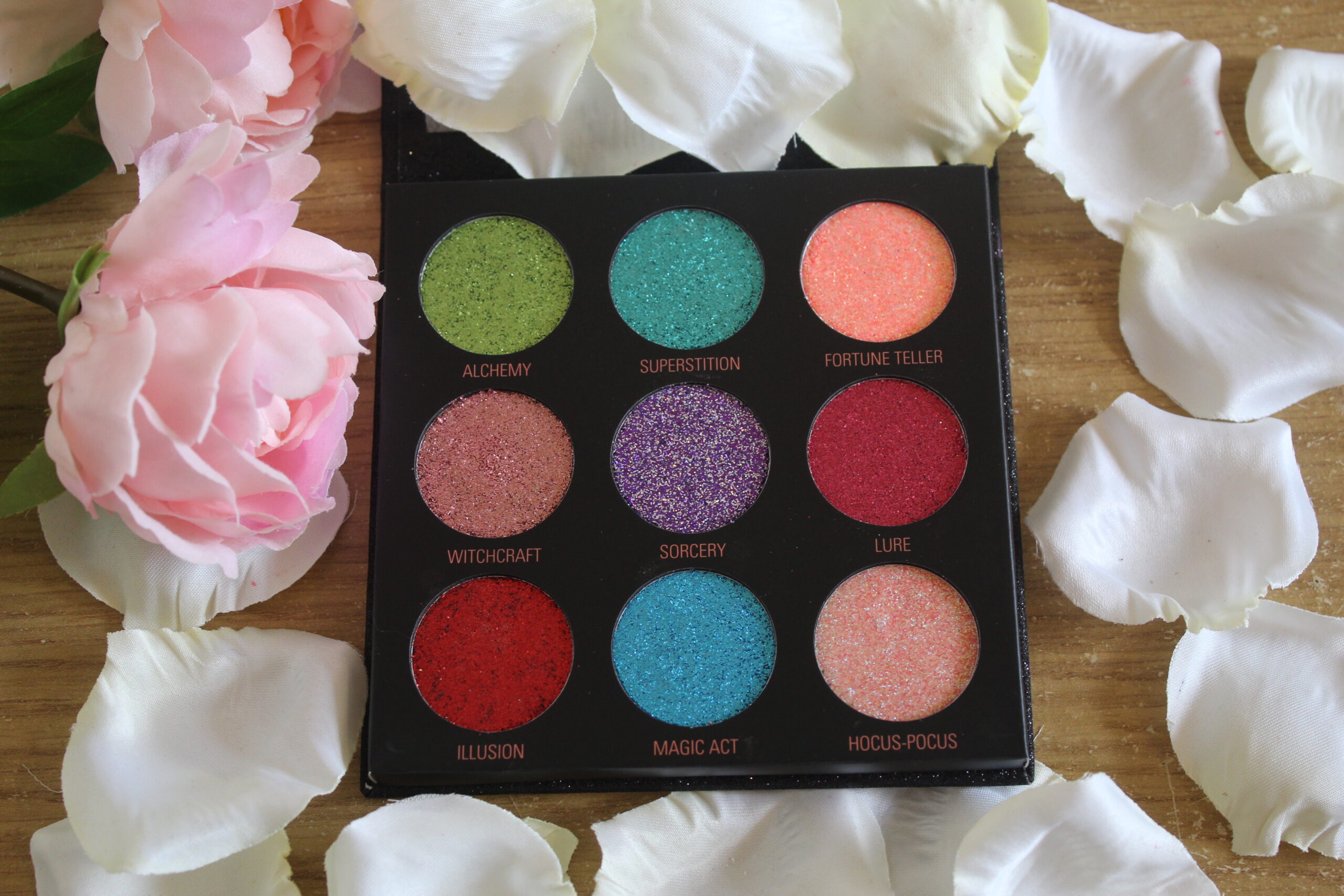 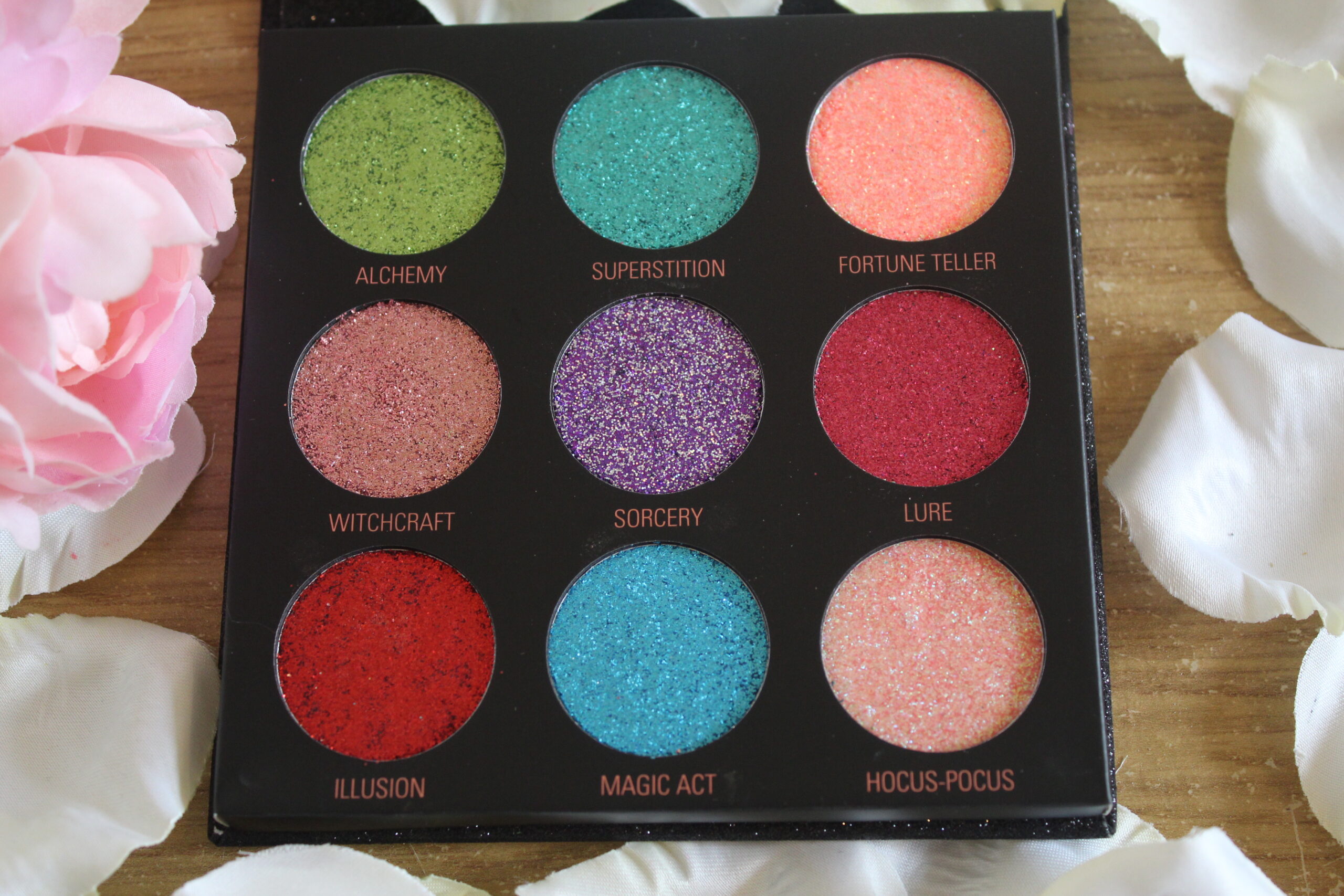 I have actually used these on my nails since I brought them. I put the glitter on my nail on top of the clear and they dried in really well and then I put another clear coat on top. Multi tasking!

I would say this is the only one out of the four I brought that I wouldn’t have maybe brought if I had been able to go in store and test for example. It pretty and amazing for some occasions I am sure but I personally think ill get limited use and I can imagine maybe ending up with glitter spread across my face by the end of a night out. I think it has its place in my make up draw but I think it may stay there more often than not. 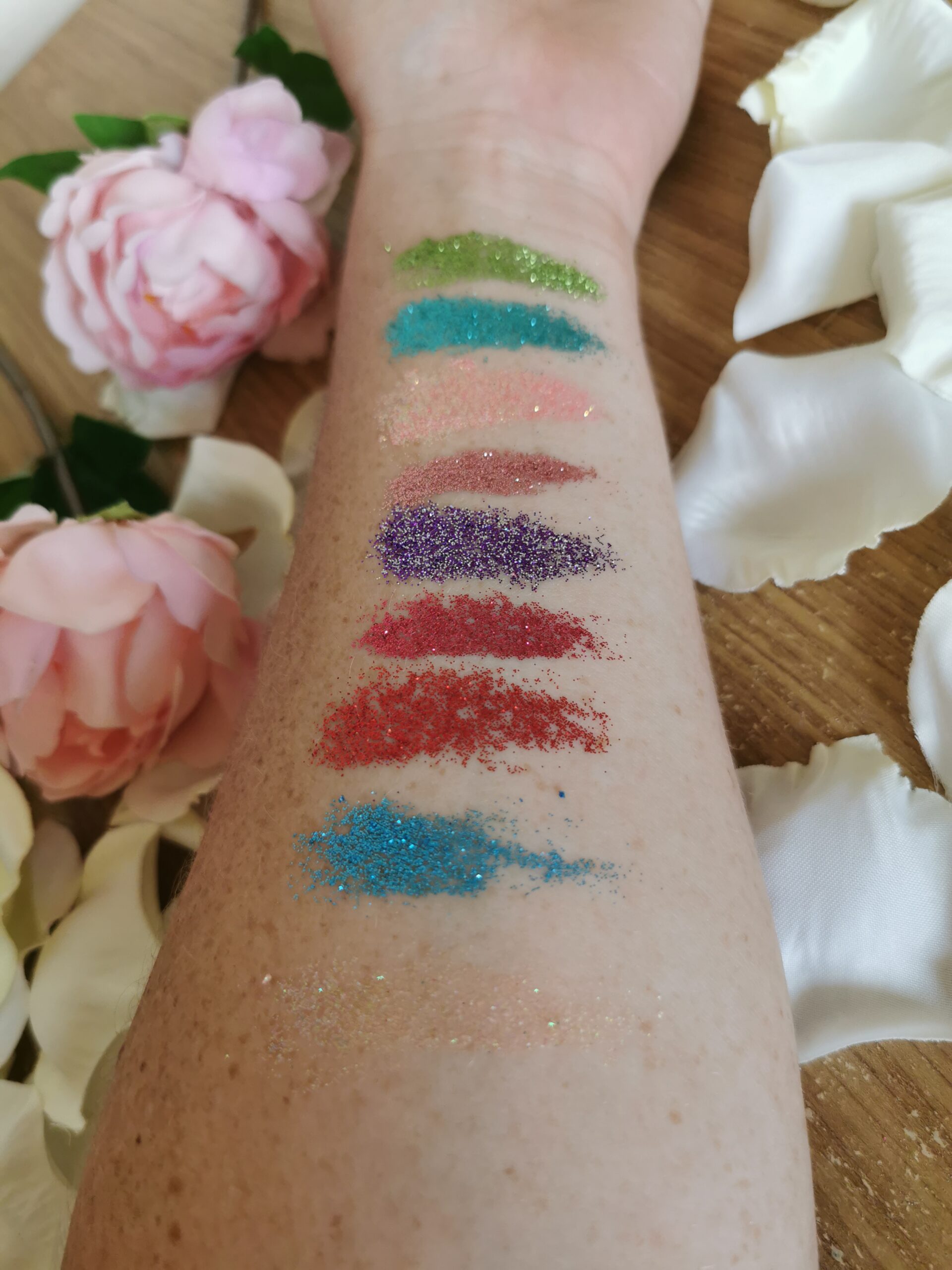 So they are my new palettes from Revolution and Revolution Pro, overall I am really impressed as usual. I think there is something for all occasions between these palettes and also all seasons which is what I like. All I need now is for us to be allowed to have parties, holidays and nights out in order to use my new buys. 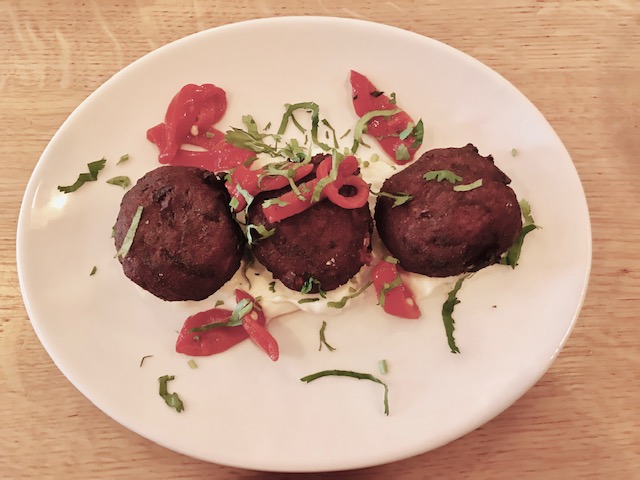