I was having a little walk around Morrison’s my local supermarket as I often do picking up things that I didn’t need (as I again often do) and I spotted these vegan pates. I used to love pate so much but it of course tends to be meat based and so I didn’t consider it as a food I would be having again. I spotted these two pates in the free from section, the free from section is a little random in my supermarket as they have so many different bits and bobs which I actually love.

These are the Granovita pates (not a brand I have heard of until now but I wish I had done) http://www.granovita.co.uk/.

They only had two so I of course brought them both, they are an olive pate and a mushroom pate. The tubs looked quite small but actually they made about 6 slices of toast worth of pate (I did not eat all 6 at once) and they cost me about £2 each so I was impressed with that. 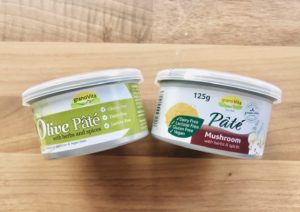 The vegan mushroom pate first was very mushroomy (sounds daft but I mean it had a really nice rich flavor). The texture is slightly different to meat pate in the sense it is less thick and slightly like moose. I would actually say it spreads better on toast and crackers that meat pate though so the slight change in texture is an advantage. It is quite sweet and so I couldn’t eat too much at once whereas meat pate had more of a savory flavor. 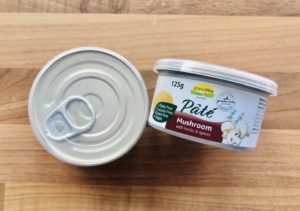 The olive pate was also yummy it was a little bit like an olive tapenade in flavor and slightly more intense in flavor but then olives are generally anyway. It was again like a moose in texture, this felt like it went better with some nice crispy bread like toasted sour dough. I took both of these to work with me and they were a really nice to travel with, they were not messy and they have a resealable lid which is great. These pates are vegan, gluten and lactose free so really good for a quick snack or work lunch. 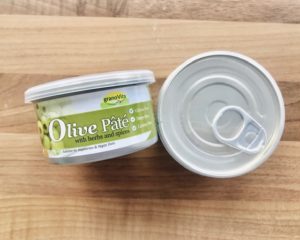 Granovita do loads of other products as well so they do other pates, full vegan meals and things like seeds and oils so I will most certainly be checking out the website but also hoping to see more in my local Morrisons.

Let me know if you have tried any of this range or even these pates, what did you think?