My normal food shopping finds me in Morrisons Supermarket more often than not as I live aprox 5 minutes from there although as of late I have been trying really hard to go to the grocers near me when the opportunity comes up. However I still do shop in supermarkets for what I suppose are vegan fast food bits and treats. Recently I have found myself in a number of different supermarkets and each time picked up a few vegan bits I hadn’t tried before so I thought I would share with you what I found and where. 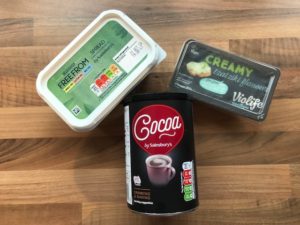 I find Sainsburys one of the best Supermarkets to have there own brand Free From and vegan bits. I have posted about the cheese before and some of there spreads, another excellent thing that they do is their Free From ‘butter’. This is the biggest tub of ‘butter’ that I have found that is vegan, I have used Vitalite and a Pure range which are good but this is the biggest and best value for money. It is also very spreadable, I don’t believe that any non vegan could tell the difference between this and for example Flora. 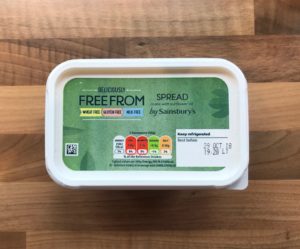 The next purchase designed to go on top of the cake which you will see later in the haul but I have actually been using it as hot chocolate as well. It is really good, it is Sainsburys own and cost about £2/3. I just heat up some soya milk (or any dairy free milk) and then add this in and mix and it creates a rich and lovely hot drink. Its a huge tub and I have had so many hot chocolates and it doesn’t even look like I have dented it so if you are vegan or not this is a great choice and great value for money. 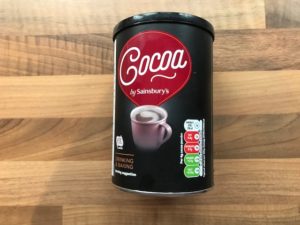 Next is this vegan Tzatziki from Violife, this is so spot on in terms of flavour. It has a texture that is more like soft cheese rather than actual tzatziki but personally this doesn’t bother me. I have had it on bread, crackers, salad and on my lunch for work instead of hummus. Its about £3 so not cheap for the tub size but really nice if you are having tapas style food and want vegan choices. 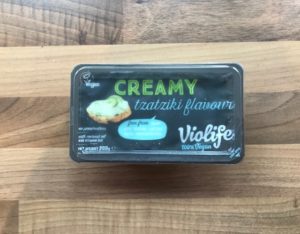 Next is a whole massive selection of hummus, firstly the classic original hummus. I do often feel like I have this for every meal bar breakfast maybe. I do make my own hummus but the shop brought variety is so cheap and easy that I do often turn to this as well. I have it on salad, sandwiches, with pizza, on crackers and with different meals that need a bit of source. 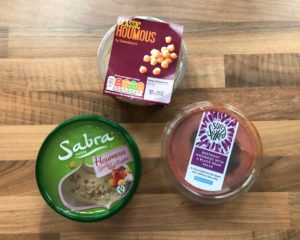 I have two different classic brands that I prefer and these are the Sainsbury own classic and the Sabra brand. This brand is so creamy almost with a moose like texture, it is best for on crackers or with French bread I think. 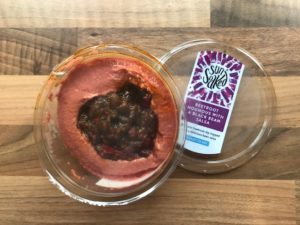 Then this time I tried the Sun Soaked brand with the beetroot flavour and black been salsa. This was lovely, I’m not sure if Sun Soaked is a new brand but they had a few other products such as pizza and sun dried tomatoes and it was all on offer. This was very strong in flavour and I felt was best with crackers rather than on a pizza or soothing with a strong flavour as it was enough on its own. 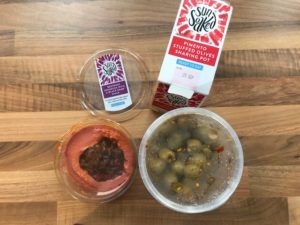 Lastly olives also by Sun Soak, a massive tub of olives actually. These were green olives in garlic and lemon and has peppers in the middle of them. They were very yummy and I’m sure I don’t need to tell you go with everything. 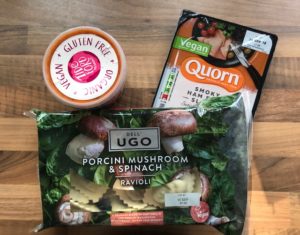 Next we have Waitrose, not a place I normally shop as product for product it is expensive compared to others however it does have some great vegan bits and also although I haven’t featured them here they have a great vegan skincare range. 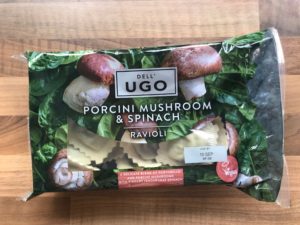 Firstly I have the Deli UGO Porcini mushroom and spinach ravioli. Most raviolis have cheese of some sort in ruling them out for vegans so I was really happy to find this. It is simply cooked by being on a pan in boiling water for about 5 minutes. It will pop to the top when cooked. I would recommend this, it had plenty of filling in and the pasta was light and  not too stodgy. 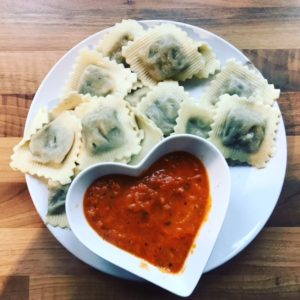 I actually ate this with just the below source as an accompaniment. 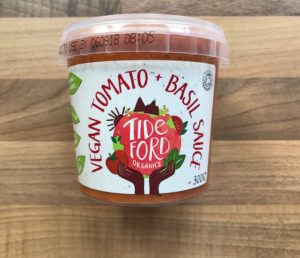 This sauce is the Vegan Tomato and basil sauce by Tide Ford Organics. Its not a brand I have tried before but it is certainly lovely. It is very tasty almost moreish and would go really well with any type of pasta or spaghetti. I didn’t add anything to this as the pasta was already filled but on normal pasta I would be adding in vegetables, Quorn chicken or other Quorn ‘meats’. 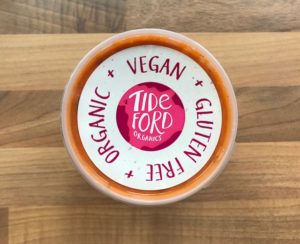 Next I have Morrisons so I do go there a lot and get lots of vegan basics but these are products I haven’t tried before.

Firstly I have cake, lazy cake admittedly but still cake. This is the Free and Easy Chocolate Cake mix, it is gluten and dairy free and also made without sugar. I actually didn’t make it like they have on the cover I just made the mix put it in the baking tin and then added custard (lots of it) to the top. Its even lazier than the packet suggests but food doesn’t always have to be complicated to be yummy. 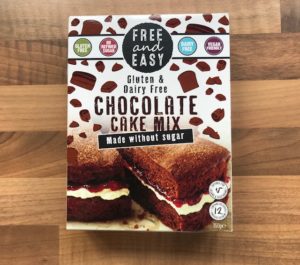 Next is salad cream, this is not something I purchase regularly as I prefer mayonnaise but when they ran out of vegan mayonnaise in my supermarket I decided that this was worth a try and I am so glad I did. It is vinegary and also a bit sweet and goes perfectly with sandwiches, nuggets and surprisingly salads. 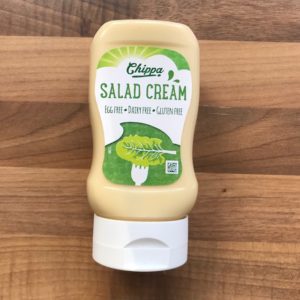 Then last but not least is some Free From flapjack slices. These come in the cutest little packages of two and are so good to take to work for lunches or snacks or just to keep in my bag. As a vegan I don’t always know if Ill have options in shops or at events so these fill a little gap and are a nice little sweet treat. 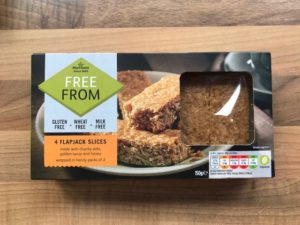 So that is my multi supermarket vegan haul and I have enjoyed all of it. Hopefully you have as well.